An increasing trend in the consumption of natural gas in Greece in 2020 is shown in DESFA’s data for the period January - September 2020, with half, in fact, quantities that covered the needs of the Users of the National Natural Gas Transmission System (NNGTS) during this period to come from the Liquefied Natural Gas (LNG) Terminal of DESFA in Revithoussa.

According to data from DESFA, domestic consumption in the period January-September 2020 has reached 4 bcm or 46.2 m MWh with 2.2 bcm or 25.8 m MWh to be gasified quantities from the facilities of Revithoussa. Actually, 48% of the natural gas came from imports of LNG cargo, which, it seems, maintain the high levels of 2019, while the number of tankers that have landed in the tanks of Revithoussa have already reached 40.

LNG, due to lower prices in comparison to pipeline gas, dominated in domestic consumption between January and September 2020. According to DESFA’s data, Revithoussa received cargoes from 6 different countries. Although in 2019 Algeria maintained a dominant position in the quantities of LNG imported into the country with a percentage of 20%, in the first nine months of 2020 USA take the lead with a percentage of 50% (an increase of 420% compared to 2019). Also important are Qatar (25%) and Nigeria (12%), followed by Algeria (6%), Norway (4%) and Egypt (3%).

The import of natural gas at the three points of entry of Greece, i.e. in the Greek-Turkish border in Kipi of Evros, in the Greek-Bulgarian border near Sidirokastro of Serres and in the Revithoussa LNG Terminal (Ag. Triada entry point), was divided as follows: 52% of the gas which was imported through the two NNGS main entry points from Bulgaria (2 bcm) and from Turkey (0,3 bcm), while 48% was imported through the LNG terminal of Revithoussa. DESFA's infrastructure has contributed substantially to the diversification of natural gas sources and security of supply. The liberalization of the energy market and the Third Party Access (TPA) regime, under which DESFA operates, enhance price competition. TPA is governed by the provisions of the European Union and National legislation and means open access to any interested party.

For another year, the role of Greece as an energy hub in the wider SE Mediterranean region is confirmed in practice, as there is still a continuous and systematic increase in the quantities of natural gas exported to Bulgaria. Specifically, in the first half of 2020, natural gas quantities of 0,6 bcm or 7.2 m MWh were exported from the Exit Point of Sidirokastro to Bulgaria.

The biggest percentage of the natural gas consumption is connected to the electricity producers, covering 66% of the overall domestic demand, followed by residential and commercial consumers supplied through distribution networks, consuming 18% of the overall demand, while 16% of consumption was covered by national industries which are connected directly with DESFA’s high pressure system. 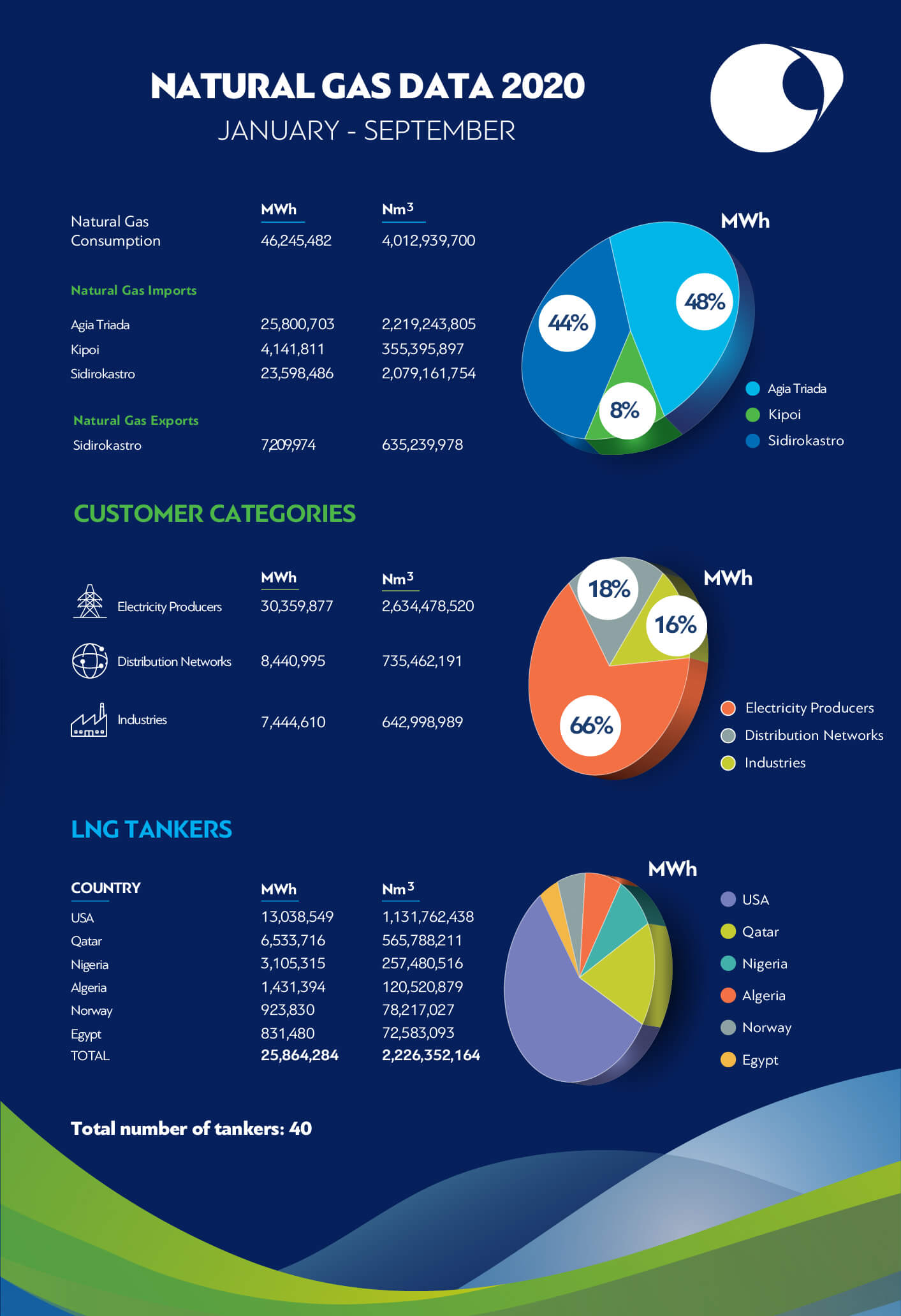