An increasing trend is recorded in the total demand for natural gas in Greece, according to DESFA’s data for the first half of 2022, with Revithoussa LNG Terminal (Agia Triada entry point) becoming the country's main natural gas entry gate during the specific period and the point of interconnection with TAP pipeline (Nea Messimvria entry point) to also contribute significantly to gas inflow in the NNGS.

Specifically, according to the relevant data of DESFA for the period January – June 2022, the total demand (domestic consumption & exports) of natural gas increased by 3.84%, reaching 38.91 Terawatt hours (TWh) over 37.47 TWh during the corresponding period of the previous year. A decrease of 10.33% was noted in domestic consumption from 33.80 Terawatt hours (TWh) to 30.31 TWh, while there was notable increase in natural gas exports of 134.33%, from 3.67 Terawatt hours (TWh) to 8.60 TWh. 22.10% of the total demand for the first half of this year concerned natural gas exports, mainly to Bulgaria from the interconnection point in Sidirokastro, while small quantities of natural gas were also exported to Italy via Nea Mesimvria and TAP.

Accordingly, natural gas imports amounted to 38.92 TWh, recording an increase of 3.65% compared to 37.55 TWh in the first half of 2021. The largest quantities entered the country from the Revithoussa LNG Terminal, which covered 44.50% of imports, recording a significant increase compared to the first half of 2021. In particular, about 16.61 TWh of LNG was unloaded by 39 vessels from 6 countries, compared to approximately 10.76 TWh by 15 tankers from 4 countries in corresponding period of 2021. The increase mainly concerns LNG cargoes from the USA, which reached 9.79 TWh, compared to 4.09 TWh in the same period last year, with the USA remaining the largest importer of LNG in our country with a percentage of 58.94%. Second in place were imports from Algeria (2.47 TWh), followed by Egypt (2 TWh), Nigeria (1.20 TWh) and Oman (1.03 TWh), with Indonesia (0.11 TWh) being in the last position.

As far as the gas consumers’ categories are concerned, electricity producers continue recording the highest consumption, covering more than 67.27% of domestic demand with 20.39 TWh out of a total of 30.31 TWh consumed. Consumption recorded by households and businesses through distribution networks increased by 8.42% compared to the first half of 2021, amounting to 8.24 TWh corresponding to nearly 27.19% of the demand. Consumption by domestic industries and CNG in the first half of 2022 was at the level of 1.67 TWh, with a downward trend of 71.06% compared to the first half of 2021, being recorded while it covered the 5.51% of the total demand.

DESFA’s infrastructure continues to contribute substantially to the diversification of gas supply sources and security of supply. Finally, the liberalization of the energy market and the Third-Party Access TPA, under which DESFA operates, strengthens price competition. Third-party access (TPA) is governed by the provisions of European Union and national law, ensuring open access to any interested party. 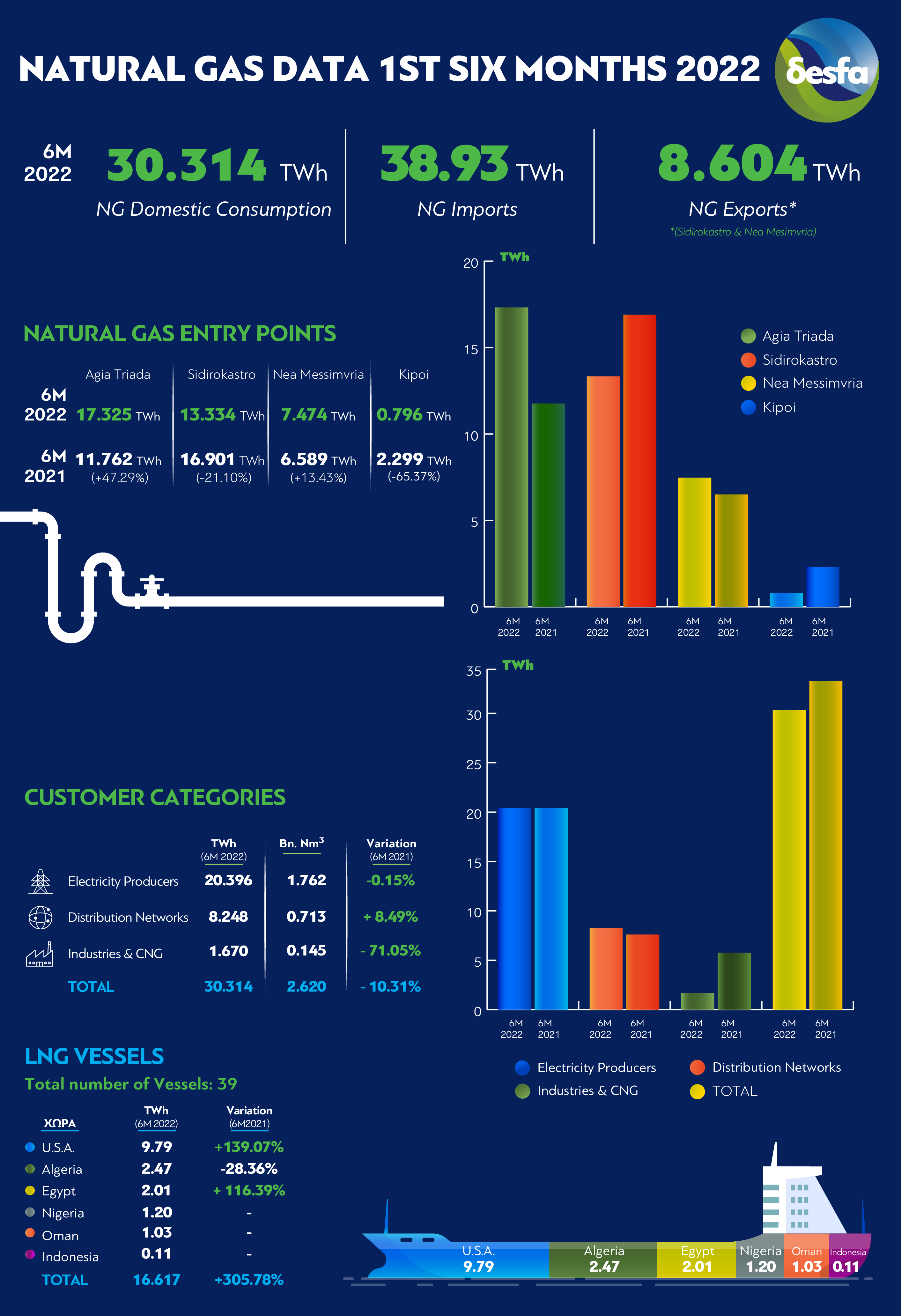