According to DESFA’s data for 2022, an increasing trend was recorded in the total demand for natural gas in Greece, driven by gas exports. Revithoussa LNG Terminal (Agia Triada entry point) was the country's main natural gas entry gate, while the interconnection point to the TAP pipeline (Nea Mesimvria entry point) also contributed significantly to the gas inflow in the NNGS.

The 19.04% decline in domestic consumption, from 69.96 Terawatt hours (TWh) to 56.64 TWh, was exceeded by the remarkable 288.68 % increase recorded in natural gas exports from 7.6 Terawatt hours (TWh) to 29.54 TWh. In particular, 34.27% of the total demand for 2022 was related to natural gas exports, mainly to Bulgaria from the interconnection point in Sidirokastro, while smaller quantities of natural gas were also exported to Italy through the TAP pipeline from Nea Mesimvria.

Accordingly, natural gas imports reached 86.16 TWh, increasing by 10.84% compared to 77.73 TWh in 2021. The largest quantities entered from the Revithoussa LNG Terminal, which covered 44.2% of imports, achieving a record increase compared to last year. Sidirokastro entry point was in second place covering 34.34% of imports (29.59 TWh), followed by the entry point in Nea Mesimvria, which, through the TAP pipeline, covered 18.64% of imports (16.06 TWh). Finally, Kipoi entry point in Evros covered 2.82% of imports (2.43 TWh).

As far as the gas consumers’ categories are concerned, the largest part of domestic consumption (73.55%) corresponds to the consumption of electricity production units, followed by household consumers and companies connected to the distribution networks, with a percentage of 21.50%, as well as domestic industries, which are directly connected to the high-pressure system of DESFA, with a percentage of 4.95%.

In summary, in 2022 DESFA’s infrastructure contributed substantially to the diversification of natural gas supply sources and to the strengthening of the security of supply level both in Greece and in the wider region. The liberalization of the energy market and the regulated Third-Party Access TPA, under which DESFA provides access to the NNGS, strengthens competition among natural gas suppliers for the benefit of end consumers. Third Party Access (TPA) is governed by European Union and national law provisions, ensuring open access to any interested party. 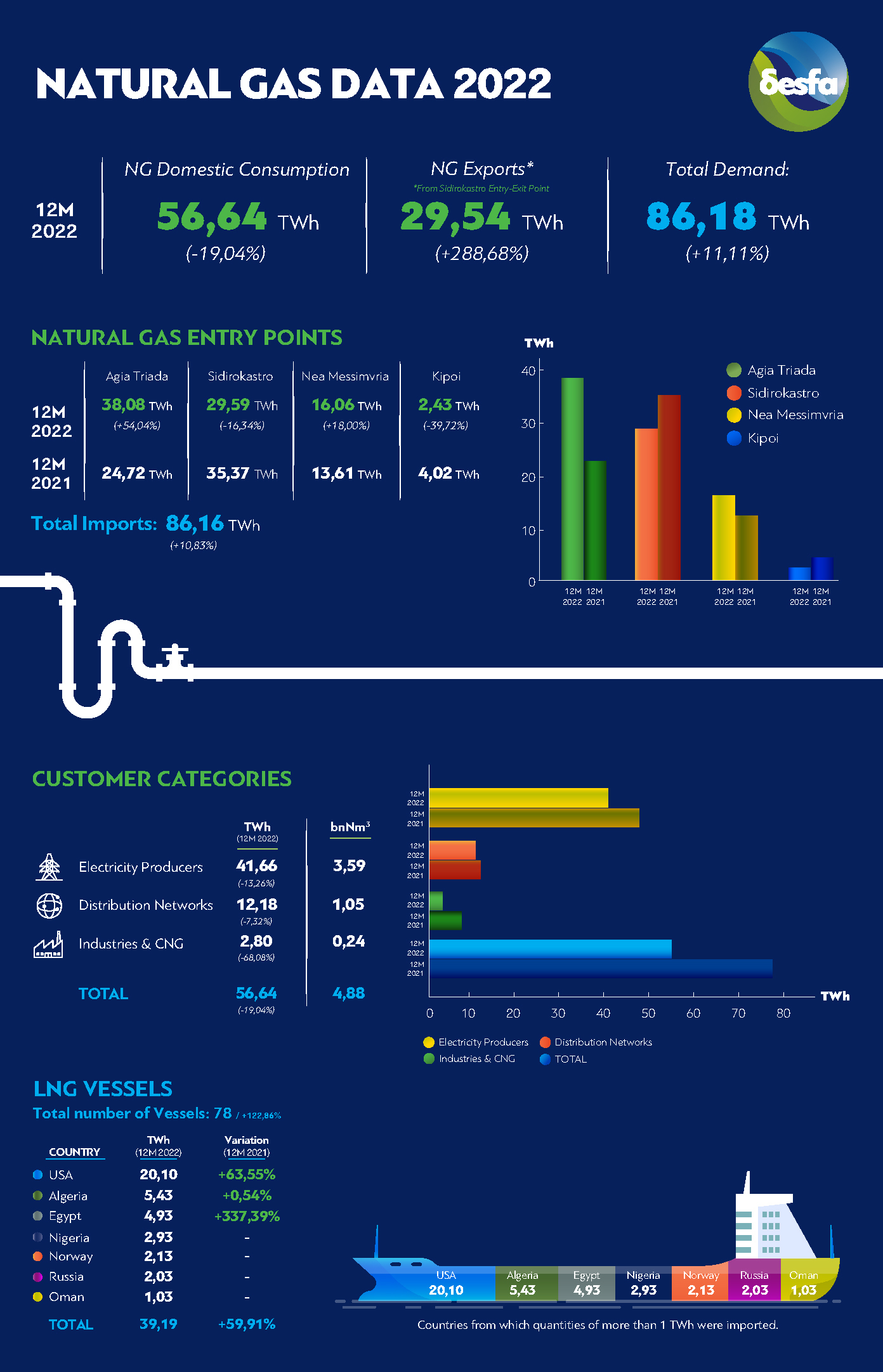